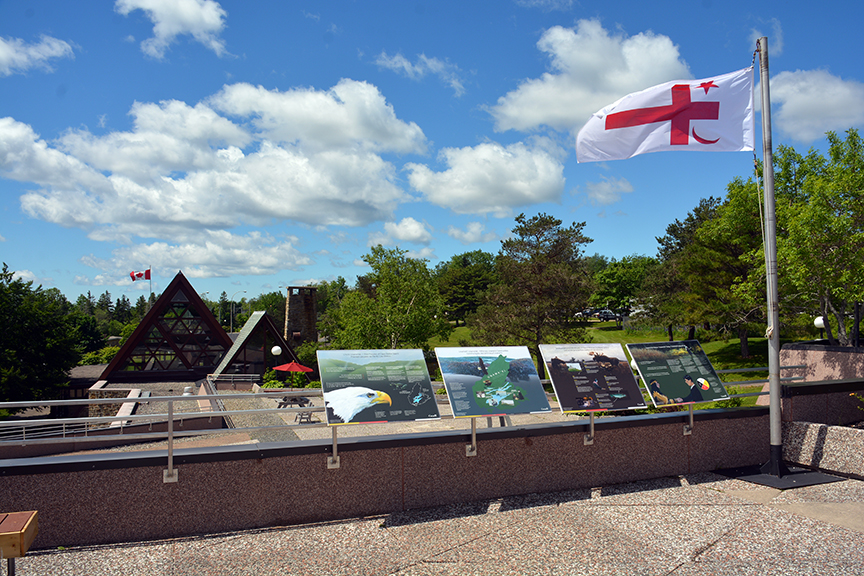 The Mi’kmaw flag flies proudly at the Alexander Graham Bell National Historic Park, standing guard over the new set of interpretive panels that were developed in collaboration with UINR to share and celebrate Mi’kmaw culture in Unama’ki.

The process started with Charlie Dennis and grew to include others including Nadine LeFort, Annie Johnson, Lisa Young and Weldon Bona, as well as several Parks Canada team members. UINR developed the text, illustrations are by Leonard Paul, and Barbara Sylliboy did the Mi’kmaw translations.

Madeline Harvey, National Historic Site and Visitor Experience Manager, had this to say, “We, at Parks Canada, are privileged to have such a close relationship with the Unama’ki Institute of Natural Resources. Through this relationship we have learned about the Mi’kmaw community’s close ties to nature. Their natural resource management connects people with plants, animals, and the environment as a whole.”

There was a full house of community members, students, and tourists on hand to witness the official unveiling by UINR’s Lisa Young and Clifford Paul. After the unveiling Lisa talked about the importance of the event to her. “When Parks Canada approached us to assist in the creation of the panels we were more than happy to oblige. Over the years UINR has developed a great working relationship with Parks Canada and they have assisted us with a number of great projects–from our Nikani Awtiken Youth Camp to booklets and videos–so we were happy to return the favour.

“The best part of the day for me was to see the inclusion of so many Mi’kmaw youth at the unveiling. I think that it must be a very uplifting for our youth to see their communities and culture both welcomed and celebrated at such a prominent place as the Bell Museum. We look forward to collaborating with Parks Canada on many other projects in the future.”