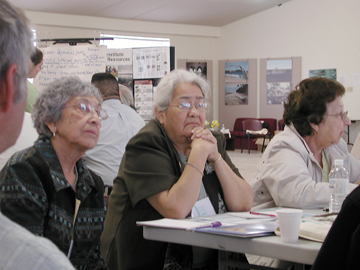 For a taste of some of our findings, here are some quotes from the workshop.

If the Elders before us were asked these questions about 50 years ago, they would have had all the answers. When they died, their knowledge died with them. We used to take home remedies from our Elders that worked for our ailments, but we didn’t know what it was that we were taking and we still don’t know but it worked.

When you see a fox, people don’t like it. I don’t like when people say things against fox. They are a native species. It’s our fault for taking away their habitat. We forget how we interact with nature. We are imposing on this animal’s habitat.

A lot of our people think owls are bad luck. You can listen in between the hoots and there is a voice with a message from an ancestor. But it’s not bad luck. Listen to him and try to understand the message.

When I was a kid I walked through eelgrass. They are great nurseries. You would see a lot of minnows, pinfish and eels and watch them swim away. I want to talk to youth to let them know that eelgrass beds are important nurseries. Eelgrass has decreased a lot. It is different today.

There is a lot less eelgrass around the Bras d’Or. I’m amazed by the infestation of green crab. I think the one most important single cause for the decline in eelgrass is the green crab.

I did a lot of diving in the 1970s on eelgrass beds. There is such a difference now. Now you only get a fraction of eelgrass beds that there once was. Eelgrass looks like there is a film of something on the leaves and fronds. It doesn’t look healthy. This occurs in many places. In Georges River, eelgrass and wharves are covered in black tunicates, blanketing the eelgrass. It’s [black tunicate] in more coves than ever before. Shallow species have died.

Legend had it that a large serpent existed in the Lakes, and people would stay away in the fall. It was later found to be an “eel ball”. This ball of eels congregated in late February in a river mouth and rolled back and forth along the channel for up to two weeks. Fishermen would make a string of holes in the ice heading upstream and each would have an opportunity to fish as the ball rolled past their hole and on to the next. These “rolling eels” are disappearing.

Oysters used to be a big revenue thing in Malagawatch but now you can hardly find any anywhere.

Anywhere where they allow dragging in the Lakes, it destroys everything. Dragging turns an underwater forest into a desert with one pass.