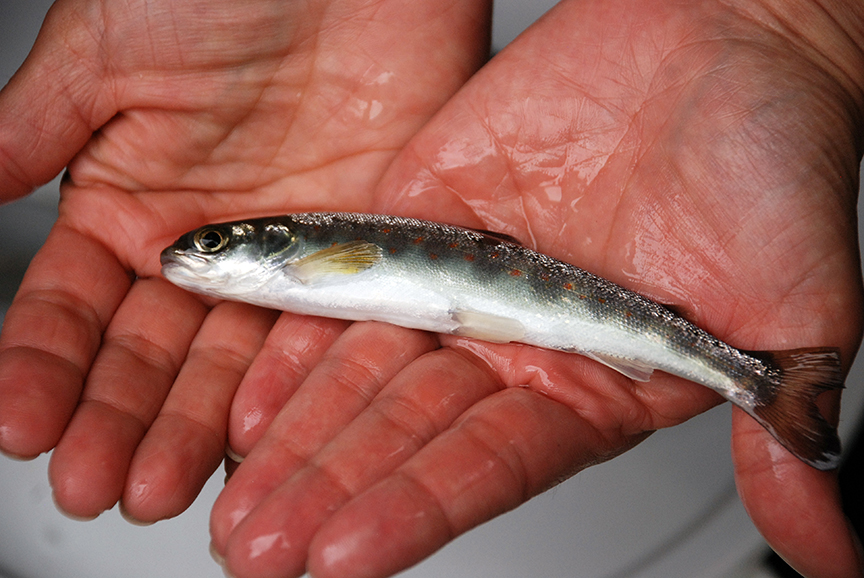 Plamu/Salmon are a big deal at UINR and we do a lot of work to make sure they are here for future generations to enjoy. Every spring we capture young Plamu (smolt) and take a sample of their scales to do further research. Working with Ocean Tracking Network at Dalhousie University our new recruit, Emma Garden, received training to age scales while Tyson Paul and Angela Denny refreshed their skills.

Scale aging tells us the smolt’s age and growth and is important for understanding how long juvenile salmon stay in rivers and how long they stay at sea.  It gives us an idea of the Plamu’s life history and how it grows over time.

We collect scales from smolt captured using a a smolt wheel that has been installed every spring in Middle River since 2011. After collecting information from each young salmon such as its life stage, length, and weight, scales are scraped off using a knife and placed on a microscope slide. Each slide is covered, numbered, and placed in an envelope to be examined later in the lab. Smolt scales from Middle River have a unique pattern compared to scales from other areas. The concentric ring with growth radiating out from the middle is known as the “focus”. These rings are counted like tree rings. Rings are closer together in winter when smolt eat less and growth is slow. In spring, when fish resume eating and growing, rings are farther apart. Smolt are aged based on the number of winters they survived. The transition from tightly packed to wider spaced rings show one year of growth. Most Middle River smolt leave the river when they are three years old.

Scale aging is a science and an art and not an easy task, but with team work and lots of practice, UINR is able to assign ages to the fish weighed and measured to get an idea of how fast or slow they grow compared to other populations.