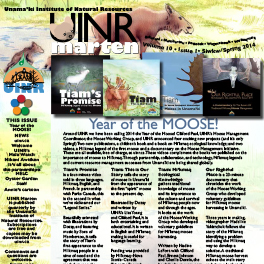 The Spring issue of UINR Marten is available now as a free download.

It’s been a busy year so far and we have a lot of new projects on the go.

It’s the Year of the Moose at UINR and this issue features information on two new videos and two new books that we just published. You can see the videos here at UINRtv and download free copies of the books in the LIBRARY.

We introduce you to two new people that you’ll see around UINR this summer, Pie’l Lalo Paul and Shanna Francis.

It’s UINR’s 15th anniversary and our Executive Director Lisa Young looks back at our original goals and ahead to the future.

We give you a look at some of the activities we’ve been involved with at Malikewe’j and a sneak peek at an exciting unveiling that’s coming up later in Mala later this summer.

MELC-Mi’kmaq Environmental Learning Centre is our featured profile in this issue and as well as telling you all about it, we preview our Mi’kmaq Youth Camp, Nikani Awtiken 2014 with some information on how you can get involved.

Charlie Dennis tells us about some traditional methods and science at work at Chapel Island in his popular Oyster Garden story.

If that isn’t enough, theres our usual mix of news, photos, and a new Annie cartoon!