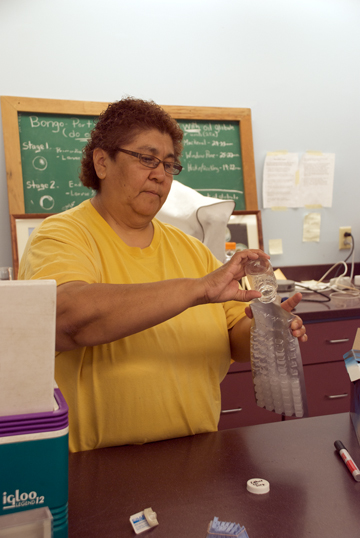 We call her Lorraine but many people in Unama’ki know her simply as the “Water Lady.” Thanks to Lorraine’s hard work, we can rest assured that the water we are drinking is safe, clean, and pure.

For the past six years, every week, Lorraine Marshall, Community Based Water Monitor, is on the road collecting drinking water samples from Wagmatcook, Membertou, Wacobah, and Potlotek. She even works through Christmas and holidays. As she puts it, “bacteria never take vacations!” First stop in Lorraine’s busy week is the lab in Eskasoni where she sets the two incubators to 35C. The incubators are used to bring the water samples to a temperature where, if there is bacteria present, it will grow.

Lorraine visits private homes, schools, health centres, apartments, and businesses in the four communities and collects water samples in sterile100ml bottles. After removing any filters and screens from the taps, she runs the water for a couple of minutes before taking her sample. She checks the chlorine content and turbidity (amount of siltation) on site and records the readings. Then it’s on to the next sampling site where she does it all over again. Some weeks, Lorraine is able to sample the sixteen sites in a single day, but often, it takes two.

The paperwork involved is stringent. Everything is recorded and double checked. Monitored by Health Canada, there are regular audits where Health Canada collects from the same sampling areas and checks that its results and Lorraine’s are the same. Records are always kept up-to-date.

Back in the lab in Eskasoni, the samples are recorded and put into sterile plastic containers that are broken up into small squares. They look like mini ice cube trays! Then it’s into the incubator that is set at 35C to mimic the temperature of our stomachs, the temperature that bacteria readily grows.

24 hours later tells the tale. If any of the squares turn yellow, a further test is done where the sample is viewed under blacklight. The colour change indicates that there are total coliforms or fecal coliforms present. Total coliforms could indicate anything organic in the water, including leaves or other debris. Fecal coliform is the presence of animal manure or human waste. That’s the stuff Lorraine hopes she’ll never find!

If the sample indicates the presence of fecal coliform, an alert is immediately sent to Health Canada. They sample the same site and if the results are the same, they issue an “Unsafe to Drink” order. Following the order, the site is sampled until it returns a clear reading and the order is lifted.

The good news is that, in Lorraine’s six years of sampling, there has never been a level that warranted a closure. She proudly says, “We have never had a boil order advisory.”

So, the next time you see the Water Lady in your community, you can thank her for making sure that the water you drink is safe and healthy.