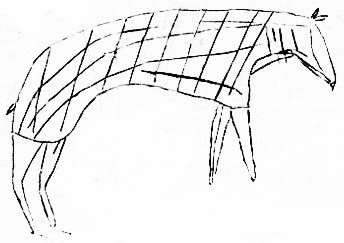 A long, long time ago, the Mi’kmaq people were faced with a dilemma–a situation of great proportion that Kluskap was summoned for a solution. It was at a time in our history when the people told Kluskap that the animals were too big and fierce in the forest. The bear was too big, gigantic in fact, as was the wolf, the beaver, the wild cat. Even the squirrel was too big! The people were in fear of doing what they had to do in the forest–the necessary activities to take care of themselves and their families.

Kluskap recognized the problem and since he loved the Mi’kmaq people, he endeavoured to find a solution. The answer came quick. He told the people that he would stroke the animals, lovingly pet them until they got to the size his people are comfortable and safe with. So he held the bear and petted it until it reached its present size. He did the same with the wild cat, wolf, beaver, and yes, even the squirrel, until all the animals were brought to their present size. They also received instructions from Kluskap to serve the humans and not annoy them to cause fear. It was agreed and all was good. Kluskap, the greatest of all problem-solvers made life well again for the Mi’kmaq.

To many, the legends of Kluskap are merely flights of historic fancy–a way to tell a story using larger-than-life characters. New Englanders have similar stories of Paul Bunyan, a giant logger who worked steadily with his giant blue ox aptly named Blue. Surely, people believed that Kluskap shared that same imaginary realm.

However, the stories of Kluskap are so steeped in the oral history of the Mi’kmaq, they can be interpreted as metaphors of the truth. Perhaps the Kluskap story referred to in this article tells the story of evolution in a colorful way, a way that is best told from elder to adult to youth, generation after generation, for thousands of years.

In fact, an artifact found in Debert, Nova Scotia takes the Mi’kmaq people back to the time of the Megafauna–a time when the bear, wolf, wild cat, the squirrel and other mammals were enormous. Scientists named the bear the Short-faced Bear. They named the ancestor of today’s wolf the Dire Wolf. The wild cat–the Sabre-tooth cat. And let’s not forget the Mastodons that roamed even this corner of the planet. These animals started to become extinct with the Ice Age.

The artifact in question, a stone hide scraper, places the Mi’kmaq in an era when these animals existed and were on the brink of extinction. Is this a sound possibility? Where is the evidence you may ask. It lies within an organic substance found on the implement. Scientists radiocarbon-dated the material (caribou blood in fact,) to 10,600 radiocarbon years. This can be translated to some 12â–14,000 calendar years–a time when the earth was experiencing rapid change, a natural warming of the planet, and the extinction of the Megafauna.

Eskasoni elder, Albert Marshall, calls this type of understanding: “Two-Eyed Seeing.” This means that the person is interpreting the natural world and events within, with two equal types of understanding–those being the modern western scientific approach combined with the traditional ecological knowledge of the indigenous peoples. Both perspectives have equal merit and equal interpretations of events–even the events of our ancestors some 12–14,000 years ago.

The creation of Five Islands is one of the most recorded legends of Kluskap. The story evokes images of land change that can still be seen today. Gerald Gloade, Program Development Officer with the Mi’kmawey Debert Project, says that science tells us that this land change took place some 6,000 years ago. “If our ancestors were here for 13,000 years, then they were living here when the Bay (of Fundy) opened up. An event of that magnitude would be something that people would record, something that Legends are made of.”  Gloade offered. “It gives us a reference point to our “Cultural Memory Timeline” and it tells me that Mi’kmaq culture and heritage have been alive and rich for thousands of years before the arrival of European settlers. Embedded in the Legends of Kluskap are stories of Sacred Places, stones, and Mi’kmaq Traditional Knowledge, and to see these ancient gems of information… you just have to look!”